1 - Use a selection index based on a balanced breeding objective

Selection Indexes allow you to make balanced selection decisions. They take the hard work out of knowing how much emphasis to put on each individual trait by ranking animals on their overall genetic value for a particular production system and value along the entire production chain.

Selection Indexes are calculated using the BreedObject™ software that has been developed by the Animal Genetics and Breeding Unit (AGBU) at the University of New England. BreedObject™ combines the BREEDPLAN estimated breeding values (EBVs) of an animal with an economic weighting on each individual trait (based on costs of production and returns on output) to produce a single selection index value for each animal.

Selection Indexes enable cattle producers to make 'balanced' selection decisions, by taking into account the relevant growth, carcase, birth and fertility attributes of each animal, to identify the animal that is most profitable for a particular production system.

Selection index values are expressed as differences in 'net profit per cow mated' and reflect differences in profitability across the entire production chain - from joining to slaughter. In indexes designed for self-replacing production systems (maternal), the long term profit generated by the sire’s daughters is also included.

A number of breed societies have generic, market-based breeding objectives and selection indexes available on their respective websites, allowing commercial breeders to search for bulls that fit within their target index specifications (see Tool 4.01). These indexes are a very good guide as the objectives for many enterprises will be similar and rank animals similarly.

The breed-based indexes have been calculated from very good industry feedback on the costs, returns and trait performance levels of the production system and market being supplied. Most commercial producers would be well advised to start with one of the standard breed society indexes and modify their selection procedures using a process described in Procedure 4.

When selecting bulls using dollar index values it is important to also consider the individual EBVs and your herd situation. This concept is covered in more detail in Procedure 3.

If your production system and target market are substantially different to those for which breed society selection indexes are based there is scope to develop your own specific breeding objective and associated selection index using BreedObject™ software.

An example of a breed society selection index*

In this example for a Bos taurus breed, the genetic differences between animals in net profitability per cow joined are estimated. The breeding goal is a high fertility, self-replacing commercial herd selling feeder steers and heifers for the short fed domestic feedlot trade.

Steers are assumed to be marketed at 445kg live weight (245kg HSCW and 10mm P8 fat depth) at 15 months of age. Emphasis is placed on growth to 400 days and high carcase yield while maintaining fertility and marbling. The key economic traits that are important in this selection index are shown in Figure 1. The different trait emphases reflect the underlying profit drivers in a commercial operation targeting the short fed domestic markets.

Figure 1: Example of the relative importance of objective traits at the genetic level for a specific breeding objective

BREEDPLAN EBV weightings are formed using knowledge of the genetic relationships between the key profit drivers and BREEDPLAN EBVs (Figure 2). For this selection index, there is a high emphasis on greater 400 day weight EBV and shorter Days to Calving EBV. 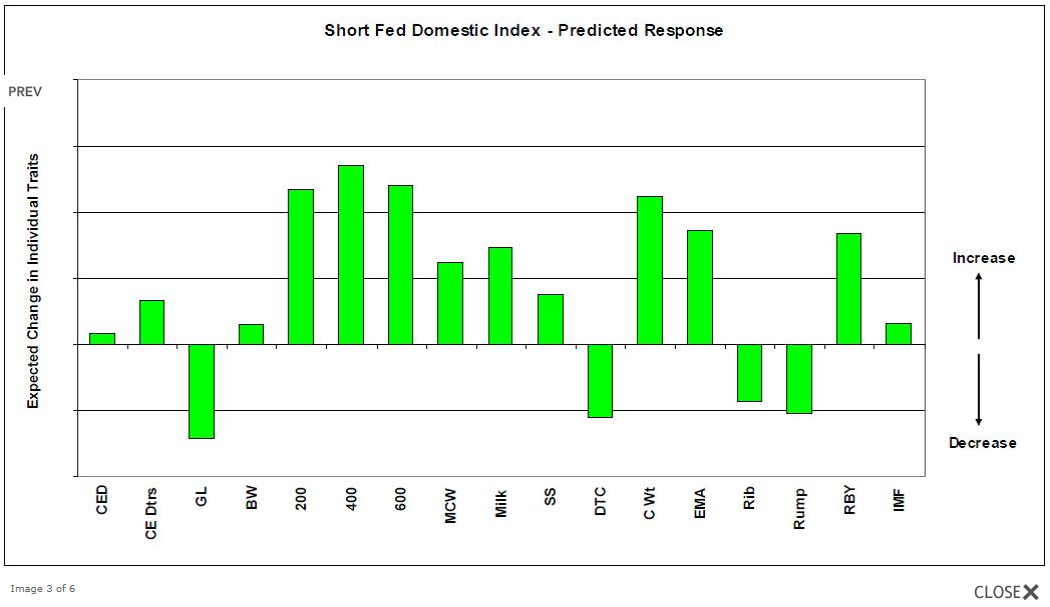 *This material in this breakout box has been adapted from material from the websites of BREEDPLAN and the Angus Society of Australia.

What is an EBV?

EBVs are expressed as the difference between an individual animal’s genetics and the genetic base to which the animal is compared. The 'genetic base' can roughly be described as the historical genetic level of that particular breed. For most breeds, their genetic base will have been set in the late 1980’s and is based on the first 200 animals’ records for that breed.

Importantly, the genetic base for each breed will be different, so only EBVs for animals within a particular evaluation can be directly compared. Putting this in practical terms, a 600 day weight EBV for a Hereford bull is not equivalent to the same EBV for an Angus Limousin bull, even if they all have the same EBV for that trait. This means it is difficult to compare EBVs of different breeds.

There are four key considerations when assessing BREEDPLAN EBVs for a particular animal:

As most breeds have experienced significant changes in their genetic merit for most traits since the mid 1990’s, the first step when interpreting an EBV should be to compare it to the current averages of the EBVs for the breed. This will give you an indication of how the animal compares with the current genetic average for each trait. This can be taken further by comparing the animal’s EBVs to the Percentile Bands Table to assess exactly where the animal ranks within the breed for each trait. As with the breed average EBVs, a Percentile Bands Table should be provided in all BREEDPLAN reports and sale catalogues.

$Indexes are discussed in Procedure 3.

When evaluating any EBV, it is also important to consider the EBV accuracy. By definition, an EBV is an estimate of an animal’s true breeding value. To provide breeders with a measure of the reliability of the estimate, BREEDPLAN produces an accuracy figure with each EBV. This accuracy provides a measure of the stability of the EBV and gives an indication of the amount of information that has been used in the calculation of that EBV. The higher the accuracy the lower the likelihood of change in the animal’s EBV as more information is analysed for that animal, its progeny or its relatives.

The following guide may be useful for interpreting accuracy:

Figure 6: Increase in EBV accuracy as number of bulls in a team increases

Although the accuracy of an EBV should be considered, animals should be compared on EBVs regardless of accuracy. However, where two bulls have the same EBV and there are no obvious visual faults, the bull with the higher accuracy would normally be used more heavily than the bull with the lower accuracy because the results can be predicted with more confidence.

What to measure and when

Annually review any changes that have been made to your production environment or target market. If significant changes have occurred, you may need to reset your breeding objective.